What are the major benefits of compressed earth block construction?

The number one benefit of CEB is sustainability, particularly for homes. CEBs are more comfortable, cooler in the summer and warmer in the winter. They use less energy to modify the temperature when it needs to be modified. They’re extremely adaptable to nice, complex designs. They’re load bearing, so you can do whatever you want with the walls, with some limitations.

Also, they’re easily available throughout the whole world. Compressed earth blocks are made from soil, which is normally taken out of somebody’s backyard—it may not be yours, but it will be somebody close—so people can take a product and build a home out of something they mine themselves. That’s a big deal. In a third world country where people have to import everything for building materials, that’s a huge deal. You can save two-thirds of the cost of construction because you can do this.

It’s fast and inexpensive to erect a building. Overall,  I’d say that CEB is probably the simplest way to build homes and a community—worldwide, whether you‘re talking about Sudan or Mississippi.

You’re saying that CEB homes are cooler in summer and warmer in the winter. How much?

Depending on how you construct the house. The baseline we work with is a geothermal temperature of about 13 degrees C (55 F). When you have a thermal in contact with the ground and you have the roof insulated well so that you’re not overheating from the sun, in the summertime when it’s 38 degrees (100 F) outside you’re walking into a house that’s 18 or 21 degrees (65 or 70 F).

Now, it doesn’t stay that way. As soon as you open up the doors and the windows, it begins to warm up a little bit because you have the convection bringing the warm air in and it warms up the walls inside. In the evening because you have enough wall exposed the sunlight hits the wall and the heat does penetrate the blocks. And when the sun goes down then the house begins to warm up. At that time you open the windows and doors to let the cooler night air come in to cool the house down and then by morning everything is nice and cool again. The walls are still warm so the house doesn’t get any cooler than about 16 or 18 degrees (60 or 65 F).

How thick would the walls have to be to create that much of a difference in temperature?

It’s been my experience that an 8-inch or 10-inch wall doesn’t quite cut it. The block sizes that we recommend are 12-inches to start. With a 12-inch wall you really improve the energy efficiency of a house. When you go to a 24-inch wall you have no heat transference either way.

Do you know what level of earthquake and tornado compressed earth block buildings can resistant?

We don’t have any real-life experience, but we’ve seen areas in Peru where adobe structures have been around for 400 or 500 years and are still standing while modern concrete structures have collapsed.

We understand why that occurs. If the earth movement exceeds the plasticity of the wall,  it doesn’t matter whether it’s earth or plastic, it’s going to come down.
A super rigid structure made of concrete and steel could withstand great force,  but it’s extremely expensive. With CEB you have all these joints between each layer and between each block. So if the wall starts to move, you have joints in the wall where the earth blocks are doing their shimmying, but they won’t have a catastrophic failure unless the movement of a wall exceeds 45 degrees. And if it shakes that hard, you’ll probably lose the wall.

If it were cement and the density were higher then the cement would be brittle. When the blocks started moving the mortar would break up and as soon as the mortar broke up and fell out you would have a catastrophic collapse of your wall. An earthquake study by Berkeley proved that less mortar, thicker walls and a really high-quality wire-stucco finish on the outside will make the house more earthquake resistant than any other way.

In dry stacking we can put the blocks on dry, but we don’t really care to do that. We like to moisten them so that they set a little better. But the truth is that they don’t stick. They don’t ever become monolithic.

But if you tied the roof to the foundation with the walls in compression between the bond beam, the ring beam and the foundation, you’re not going to lose the house or the roof because the weight of the house weighs it down.

If there was an impact in the wall,  the blocks in a pure dry stack would probably have more of a tendency to dislodge and get pushed in than one that has a slurry mix where the blocks are stuck together, but it wouldn’t take much difference in impact to get the same results.

Speed, efficiency, cost. Are there any other advantages of compressed earth block over rammed earth?

With all the advantage of CEB why don’t more people build with earth in the West?

In the U.S., it’s because our coding and advertising systems have been geared specifically for lumber and concrete. And the lumber and concrete industries are so big that they’ve done their best to make earth block a non-player in the deal. I’m convinced that the concrete industry absolutely destroyed the earth block code in California by lobbying for changes so that people couldn’t do it and that if they did do it, it would fail by design. How I read it, the code is written in such a manner that there’s no way an earth block wall could withstand an earthquake the way the California code requires it to be built.

Homes for the lower to middle income has been another problem in the U.S. Most people today don’t have a clue about building their own homes. They have to hire someone to do it. The educational process has got to be such that there are enough people who can do it. I think it’s a numbers game—the bigger you get, the more accepted you’ll be. We’re still in the starting phase here.

What’s the advantages and disadvantages of horizontal and vertical presses?

We manufacture horizontal presses, but actually, when I talk to my clients I ask them what they want to build. In some instances a vertical press makes more sense than a horizontal press. If what they want is a traditional adobe look and they aren’t interested in speed of construction—they just want to have control of their blocks—a vertical press is a really great way to do that, especially if they want exposed blocks and they want to do half bonding or one-third bonding, they will all be uniform. Vertical presses are great for that. The blocks are not uniform in height so they require mortar joints, they don’t have to have big thick ones like the old adobes, but they still have to have a small mortar joint somewhere between a 3/8 and ½-inch mortar joint. They’re good for that.

A horizontal block press makes a block that is precise in two-dimensions, both in height and width, which is the thickness of the wall and the height of the run is the height run of the blocks. By not requiring mortar you could get in there, lick ‘em, stick ‘em and stack. If you have a guy feeding and a guy stacking, two guys can stack 1000 blocks a day. Nobody’s doing mortar two run blocks like that. We could stack a wall from the foundation to the top of the wall in a day. We don’t have to wait for drying or curing time for the mortar. So the benefit for low-end and middle-end housing is greater in a horizontal block press than a vertical block press. 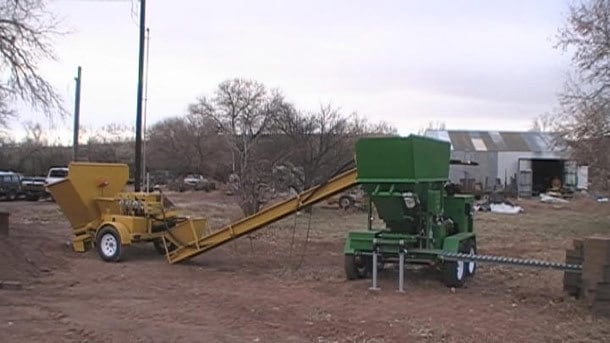 What do you think of interlock blocks?

Interlock blocks are a gimmick. They’re something that people made because somebody said “Wouldn’t it be nice if we could do this?” Well it would be nice, but the fact of the matter is you don’t need them and they just make building more expensive.

You have to put cement in them to make them work. Then you’re very limited in your wall design because the interlock blocks don’t offer much fluidity. If you’re building a cookie-cutter and it was designed for interlock blocks you’ll probably get it done. I know Hydro Form is having great success in South Africa and Central Africa with interlocks. But it costs more to build a house out of interlock blocks than it does out of what I call a P.O.B, a plain old block.

Written By
editor
More from editor
Many old farmhouses had earthen floors; they were cool and damp in...
Read More