At first glance, planting a vegetable garden in a schoolyard sounds like a great idea. And it is. But consistent maintenance is important for most soil-based gardens, and while a garden at a school gets plenty of attention in the early season, it often ends up neglected once the kids are gone for the summer and the hard gardening work begins in earnest.

Establishing a schoolyard garden has other challenges too. For one, the soil surrounding schools frequently lacks nutrients and organic compounds, and it can also be costly to do soil improvements and soil-mitigation projects. So, if the soil isn’t ideal for gardening, the budget to fix those problems can be prohibitive.

Further, in an existing schoolyard where large trees are already established, it may be difficult to find an ideal location that receives full or near-full sunlight. If large trees have been growing near the area for many years, it’s likely the soil in that area is filled with many large tree roots. These roots make tilling the soil difficult, and even if chopped off, they’ll grow back and steal nutrients and moisture from the garden crops. Finally, the site must also have access to water and be near the school for easy accessibility yet remain out of the way of kids’ play zones. The list of challenges is long.

Karen Gray lives not too far from me in Minnesota, where she has been a master gardener for some time. Karen chose to lead an initiative to create a children’s garden at Gideon Pond Elementary in the suburb of Burnsville. Locating the garden on the school’s property wasn’t easy. The group had to consider many issues when selecting a spot, and there were good reasons to dismiss most of the sites.

Karen brought to the group the Straw Bale Gardening idea, which she felt would make finding a location much easier. They’d still need a sunny location, but tree roots and soil sustainability would no longer be factors. A good fence, a water hose with a hose-end timer, and a pile of weed-free bales of straw would alleviate the other concerns that normally cause challenges for school gardens. At Karen’s urging, a plan and proposal for a Straw Bale Garden at the school were assembled.

With some help from Boy Scouts Pack 435, the garden was set up quickly. A layer of cardboard was first put down to kill the grass underneath, which was to be covered with wood mulch once the garden was set up. Several other adult volunteers helped with setting up the fence and some of the heavy lifting involved, but the children were involved in all parts of the setup process.

The kids meet at their weekly Project Kids Garden Club to learn about the garden: what makes plants happy, five good bugs and five bad bugs, pollinators and how to manage pesky rabbits and deer. They all participate in the steps taken to prepare and plant the bales. Watering is also a project that gets spread around to multiple kids. Karen says, “Students often used their recess time to water and tend to the garden.” 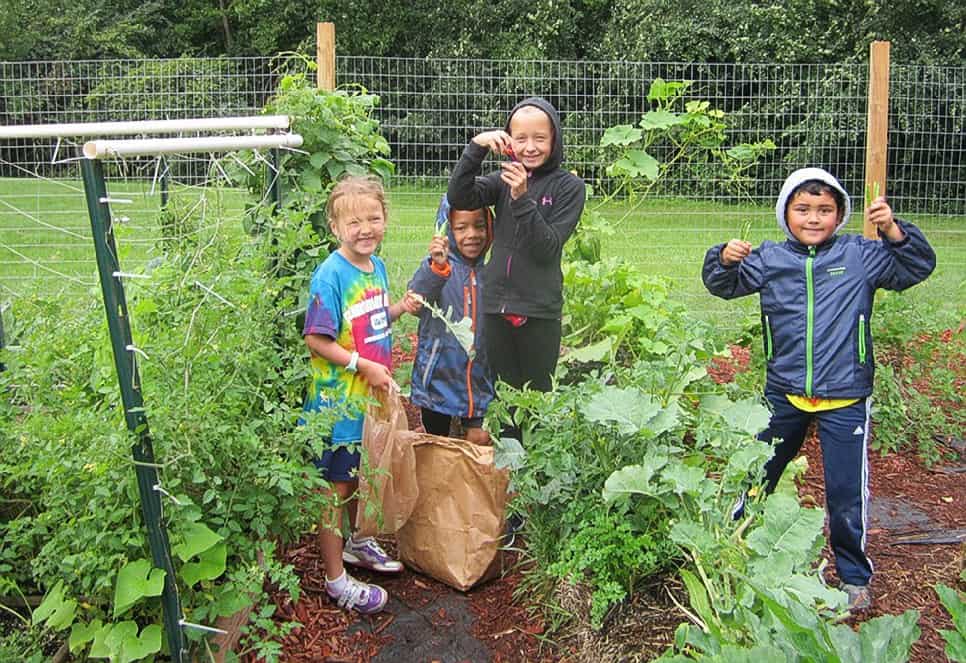 Norma Hall, a master gardener and teacher, created a curriculum for all three second-grade classes at Gideon Pond Elementary. The students learned about the Straw Bale Gardens process inside the classroom. They also participated in hands-on workshop/garden sessions to work with the bales right outside their back door.

The kindergarteners each planted seeds in April to grow indoors and then transplanted those seedlings into the bales in May. Marking their plants for identification allowed them to locate and follow the growth of their plants.

It can’t be overstated how much children get out of this experience and how influential a project like this can be on students, teachers and parents as well. 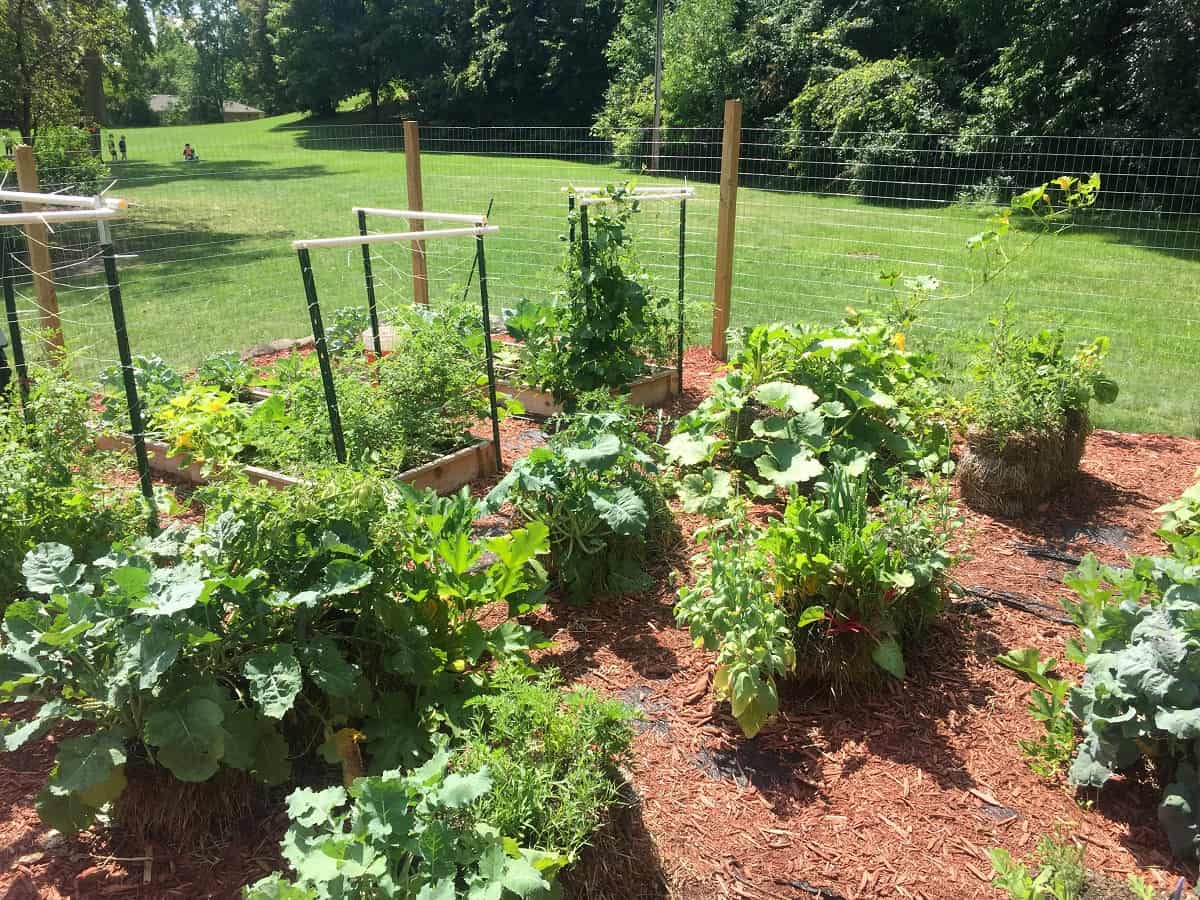 The garden was planted with many different varieties of crops, including tomatoes, peppers, eggplant, cucumbers, lettuce, radishes and more. Trellises were installed to support the tomatoes, peas, beans and cucumbers.

The garden was in full glory by late May as the children were leaving school for the summer. Most of them continued to lobby their parents to stop by the school so they could check on the garden over the summer.

No weeding and easy watering made summertime care easy for any of the volunteers who committed to keep things going. Harvested produce was donated to local food shelves and benefited many community members with more limited resources who really appreciated the fresh produce.

Lessons to be learned

Kids absorb lessons that many adults tend to overlook or undervalue. Recycling is a great example: the most effective campaign to increase the number of people who were recycling at home was one focused on school kids. They would go home and campaign for their parents to get with the program and separate out the recyclables. They taught mom and dad what they learned at school, and before we knew it, recycling became a habit in many homes all over the country.

Emphasizing the importance of providing habitat for pollinators, school kids are bringing home packets of seeds and passing along the message about protecting bees and butterflies to their parents.

I encourage every vegetable gardener to plant pollinator-friendly flower plots near their vegetable gardens. While bees may seem threatening, the only real threat we all face is the bees disappearing.

The only way the pollen can get from the stamen to the ovum of many of your favourite fruits and vegetables is by riding on the body of an insect. Otherwise, a human being has to use a tiny cotton swab to do it by hand. Imagine if you came home from a long day’s work and had to take cotton swabs out to the garden to fertilize flowers for a few hours just to ensure that you had vegetables to eat later that summer. That thought alone should encourage you to pay attention to habitat for pollinator insects.

The list of fruits and vegetables pollinated by bees, butterflies, moths, flies and beetles is very long. Make sure the pollinators stick around your garden by giving them habitat in your garden and avoiding chemicals that are suspected to be killing bees. While we don’t know for absolute certainty what is causing colony-collapse disorder in bees, using neonicotinoids in your garden at this point would be equivalent to tossing a box of aluminum cans and plastic bottles straight into the garbage can: nobody does that anymore.

My own nephew Noah has always helped his mom (my sister) with her Straw Bale Garden at their home in North Carolina. Noah has autism and has some difficulty focusing—until he finds a subject he likes, and then he really zeroes in on it. When he was nine, he was asked to give a one-minute speech in class about any subject he’d like.

Well, 20 minutes later, his teacher had to ask him to sit down. He had his mom’s copy of my first book and was teaching a workshop to the whole room, step-by-step instructions on conditioning bales and all. By the time he was done, many of the other kids’ parents were so intrigued that they had to follow up and learn more after the class that day.

To read more about working with others in your community to pursue “green” living, visit 7 Tips for Starting a Shared Composting Area with Neighbours>> 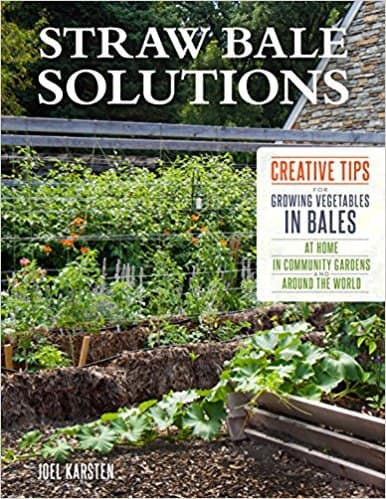 Joel Karsten developed the straw bale gardening method more than 10 years ago. As interest grew, he became one of the most in-demand garden lecturers in the United States. A pioneer and an entrepreneur, Karsten has been featured in The New York Times, national television and radio, and dozens of other major media outlets. Karsten has a degree in horticulture from the University of Minnesota, and currently resides in Roseville, Minnesota.

Excerpted from Straw Bale Solutions: Creative Tips for Growing Vegetables in Bales at Home, in Community Gardens, and Around the World, by Joel Karsten, published 2018 by Cool Springs Press, an imprint of the Quarto Group.

Written By
editor
More from editor
screen reader version: Canada’s a pretty big place. Even though the life...
Read More