One advantage of grid-tying is that compared to the other two basic connection types [off-grid and hybrid], a grid connection will allow you to save more money with your solar PV array through lower rates granted by the utility company, net metering and lower equipment and installation costs. For a fully functional off-grid solar system, batteries and other stand-alone equip­ment are required,and these will add to both the ini­tial cost of the system as well.as maintenance costs down the road. Grid-tied solar systems are therefore generally cheaper and simpler to install, as long as the grid is reasonably close to your home.

On bright days, your solar panels will usually generate more electricity than you’ll consume during the daylight hours. With net metering, home­owners can put this excess electricity onto the utility grid rather than store it themselves in a battery-bank storage system, which would involve a considerably larger initial investment.

Net metering (called a “feed-in tariff ” scheme in many countries) has played a very important role in how solar power has been supported by gov­ernments to incentivize new buyers. Without it, residential solar systems are much less financially feasible. With net metering, most utility companies are required to buy electricity from homeowners at the same rate as they sell it themselves. In this way, the utility grid acts as a huge virtual battery system.

Let me explain this battery concept. Electricity has to be spent in real time. However,it can be tem­porarily stored as other forms of energy (e.g. chem­ical energy in batteries), though storage involves significant losses. The electric power grid also works like a battery, but without the need for maintenance or replacements and with much higher efficiency. In other words, more electricity and more money goes to waste with conventional battery systems com­pared to grid-tied systems.

Annual U.S. electricity transmission and dis­tribution losses average about 7 percent of the electricity transmitted, according to the Energy Information Administration (EIA) data. Lead-acid batteries, which are commonly used with solar pan­els, are only about 80 to 85 percent efflcient at stor­ing energy, and their performance degrades over time, depending on factors like rate of discharge and the degree of discharge, or “DOD.” The DOD is the minimum charge level at which point your PV system stops draining the battery and starts the recharge cycle again.The battery “charge control­ler” manages this DOD cut-off level. This DOD con­trol system is used to protect the battery or battery bank because if you drain the batteries too much it’ll reduce their useful life.

Additional perks of being grid-tied include access to backup power from the utility grid in case your solar system stops generating electricity for one reason or another. At the same time, you’ll also help to mitigate the utility company’s peak load. As a result, the overall efficiency of the electrical grid system is improved.

There are a few key differences between the equip­ment needed for grid-tied, off-grid and hybrid PV solar systems. In addition to the PV panels, mounting support system hardware and other standard items like DC and AC disconnect switches, grid-tied solar systems rely on grid-tie inverters (GTI) or micro­-inverters, and power meters (net metering type).

What’s the job of PV solar system inverters? They regulate the voltage and convert the direct current (DC) received from your solar panels. The direct cur­rent generated by your solar panel array is converted by a central inverter or by many micro-inverters into alternating current (AC), which is the type of current utilized by the electrical appliances in your home. It might be noted here that it’s now possible in some areas to purchase DC appliances. In addition, grid-tied inverters, also known as grid-interactive or synchronous inverters, synchronize the phase and frequency of the current to fit the utility grid, nominally 60Hz. The output voltage is also adjusted slightly higher than the grid voltage, in order for excess electricity to flow outwards to the grid.

Most homeowners will need to replace their current power meter with one designed for net metering. This device, often called a net meter or a two-way meter, is capable of measuring power going in both directions, from the grid to your house and vice versa .You should consult with your local utility com­pany and see what net metering options you have. In some places,the utility company will issue a power meter for free, and they’ll pay full price for the elec­tricity you generate and deliver to the grid (the same price in $/kWh as they charge you)! However, this isn’t always the case.

However, an off-grid system can provide a viable solution in the case that you have no access (or very difficult access) to the utility grid. This type of system can be cheaper than extending power lines in most remote areas, so you might consider an off-grid system if your location is more than 200 yards (182.88 metres) from the grid. The cost for new overhead transmission lines start at around $174,000 per mile ($108,000 per kilometre) for rural construction, and they can run into the millions of dollars per mile for urban construction.

Off-grid systems also provide a solution for those who want to be energy independent. To many, the idea of living off the grid and being self-sufficient just feels good.For some people, this feeling is worth more than saving money. Energy self- sufficiency is also a form of security. Local or regional power failures in the utility grid don’t affect off -grid PV solar systems. On the other hand, batteries can only store a limited amount of energy, and during cloudy times, sometimes secu­rity actually lies in being connected to the grid. To manage this risk, you might be wise to consider installing a backup diesel-fuel electric generator to be prepared for extended periods of rainy and cloudy weather.

Solar charge controllers are also known as charge regulators or battery regulators. The last term is probably the best for describing what this device actually does: Solar battery charger control­lers limit the rate of current being delivered to the battery storage bank and protect the batteries from overcharging. Good charge controllers are crucial for keeping batteries healthy and ensuring that the lifetime of a battery bank is maximized. If you have a battery-based inverter, chances are the charge con­troller is integrated into the inverter.

Without a battery bank or a backup generator, an off-grid system will mean “lights out”at sunset. A battery bank is essentially a group of batteries wired together, connected to the inverter with a DC dis­connect switch, and then connected to selected wire circuits to provide power after dark to certain lights, as well as to selected electrical outlets for appliances like a television, computer or refrigerator. LED lights will help extend the power provided before the battery bank runs out of energy.

The below photos illustrate the diversity and flexibility of PV solar battery bank systems:

The beauty of solar battery banks is they’re com­pletely modular, which enables the homeowner to expand the energy storage system whenever desired. Depending on proper maintenance, frequency of use, and “depth of discharge,” the solar batteries will be serviceable for up to 10 years before they’ll need to be replaced.

AC and DC safety disconnects are required for all solar systems. For off-grid solar systems, one additional DC disconnect is installed between the battery bank and the off-grid inverter. It’s used to switch off the current flowing between these components. This is important for maintenance, troubleshooting and protection against electrical fires.

There’s no need for an inverter if you’re only set­ting up solar panels for your boat or your RV, or for electric loads that use only direct current. However, you’ll need an inverter to convert DC to AC for all other standard electrical appliances in your home. Off-grid inverters don’t have to match phase with the utility sine wave as opposed to grid-tied inverters. Therefore, you can expect a given manufacturer’s off-grid converter to be technically simpler and slightly more economical than its grid-tied counterpart. Electrical current flows from the solar panels through the solar charge controller and the battery bank before it’s finally converted into AC by the off-grid inverter.

It takes a lot of money and big batteries to pre­pare for several consecutive days without the sun shining or access to the grid. This is where backup diesel generators can play a key role. In most cases, installing a backup generator that runs on diesel is a better choice than investing in an oversized battery bank that seldom gets to operate at full potential. Backup generators will normally run on propane, petroleum (diesel) or gasoline. Backup generators typically produce an AC output, which can be sent through the inverter for direct use or can be converted into DC for battery storage. 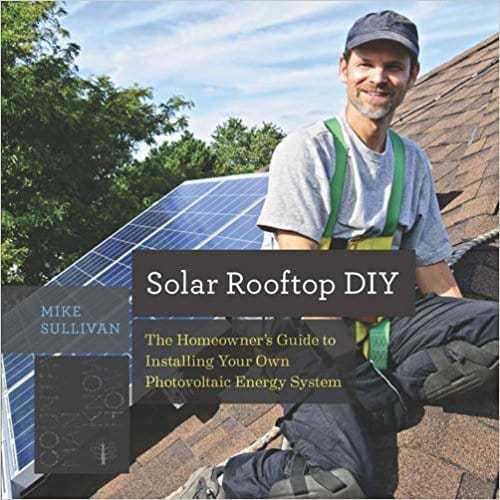 Mike Sullivan has been installing rooftop solar energy systems on homes and commercial spaces for more than 10 years. He splits time between Southeast Asia and Vancouver, Canada.

Excerpted from Solar Rooftop DIY: The Homeowner’s Guide to Installing Your Own Photovoltaic Energy System by Mike Sullivan. Copyright © 2016 by Mike Sullivan. With permission of the publisher, W. W. Norton & Company, Inc. All rights reserved.[/]

Written By
editor
More from editor
It’s not that people nowadays purposely set out to destroy the Earth....
Read More